What Happens If You Fail the PMP Exam? 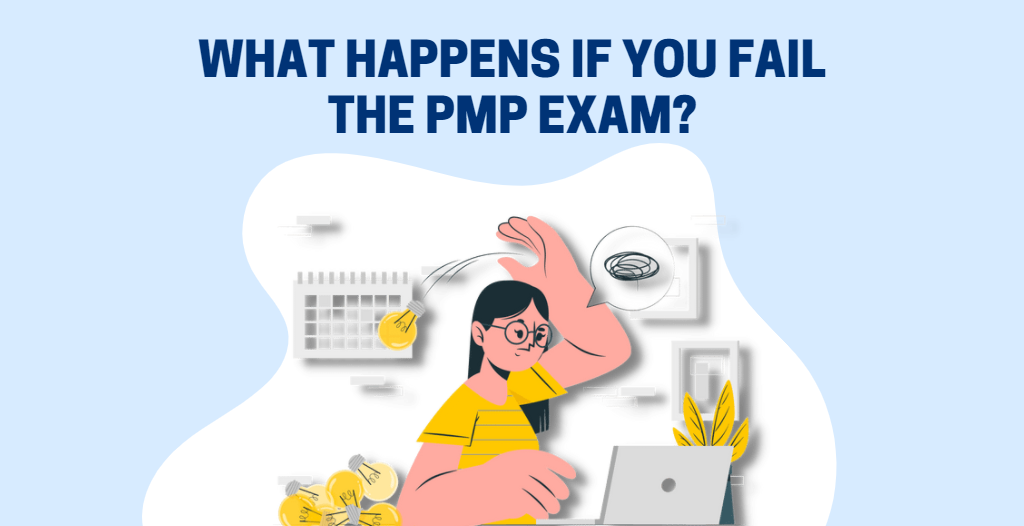 It is not an easy exam to pass the Project Management Professional (PMP)® Exam. It’s a four-hour multiple-choice exam with 200 questions. To pass, you must answer 106 of the 200 questions correctly out of a total of 200. Candidates, on the other hand, fail. It happens every single weekday. However, knowing that it happens is of little comfort if you are the one who fails. So, now that you’ve failed, what can you do? You’re not the only one who feels this way. It happens on a regular basis. It’s a difficult exam, and the first time you take it, you’ll likely learn a lot about how to approach it. A large percentage of those who try fail. Let’s look at how you can adjust and respond if something like this happens to you.

If You Fail the PMP Exam, Here’s What You Should Know

Let’s take a look at some facts before we talk about techniques for your next attempt.

The PMP exam fee for the second and third attempts is reduced, and the fee for PMI members and non-members will be different.

The following are the PMP Certification Fees for the second or third re-examinations of the computer-based test:

The following are the fees for the second and third re-examinations of the paper-based test:

Members of the PMI receive a discount of $150 USD.

What is the PMP exam’s failure rate?

You may be wondering what proportion of candidates are in your predicament now that you have failed your test.

Because the PMI does not release any official data, it is impossible to estimate the percentage of candidates who fail the exam.

However, based on my personal experience, I believe the number is fairly large, which is why this qualification is so valuable.

However, there is some good news: the passing percentage for the second attempt is quite high. Although this is sheer guesswork based on my contacts with hundreds of second-time exam takers, it appears to be the case.

As a result, you have a greater probability of passing the PMP test the second time around than you did the first.

Self-Audit is the first step after a failed PMP exam attempt.

If you fail the PMP exam, begin by conducting a self-audit. You must determine the precise reason for your failure.

Your failure could be due to a variety of factors. Here are a few examples:

You did not adequately prepare.

You succumbed to exam stress.

If you completed the exam online rather than on paper, you received your pass/fail decision as well as your rating in each of the PMBOK® project stages within seconds of finishing the exam. This is critical information to keep in mind as you prepare for your upcoming study session. Here’s what you’ll need to do next:

Read the applicable PMBOK Guide part several times in the areas where you were lacking in proficiency, making sure to maintain a level of concentration that ensures retention if not complete knowledge.

Locate and answer as many questions as you can in those places. Don’t stress about finding questions in areas where you excelled; instead, place less emphasis on them.

If you have exam simulation software that presents your results by project phase, continue these steps until you obtain a score of more than 80% right. Remember that this score isn’t the same as the one used on the exam, but it’s a good starting point for you.

It’s also a good idea to keep in mind the proportional relevance of each examination domain in terms of question count. According to how much time a project manager normally spends in each area, questions are distributed throughout the domains in the exam:

13 % of the time is spent initiating.

25% of the time is spent on monitoring and controlling.

Instead of a numerical score, you are given a classification in each of these domains:

Below Competent (meaning a below-average score)

Failure is a foregone conclusion if you score below Proficient in any topic, and it recommends a focus area for future exam preparation.

How many times do you think you’ll be able to take it?

The re-examination charge is $275 for members and $375 for non-members if they have already missed the boat.

Keeping the Readiness Criteria in Mind

As previously stated, you are likely ready for the exam if you can complete an exam set of 200 questions covering all of the PMBOK Guide (r) Knowledge Areas in four hours and answer roughly 80% of the questions correctly. To be able to determine this, you’ll need a set of appropriate tests for which you don’t recall the answers from past efforts!

Good luck, and don’t wait too long to attempt again, because unless you continue to study, your exam knowledge will deteriorate with time.

How To Avoid Seven Most Common PMP® Exam Mistakes